In this paper we investigate whether long run time series of income per capita are better described by a trend-stationary model with few structural changes or by unit root processes in which permanent stochastic shocks are responsible for the observed growth discontinuities. To this purpose, we develop a methodology to test the null of a generic I(1) process versus a set of stationary alternatives with structural breaks. Differently from other tests in the literature, the number of structural breaks under the alternative hypothesis is treated as an unknown (up to some ex ante determined maximum). Critical values are obtained via Monte Carlo simulations and finite sample size and power properties of the test are reported. An application is provided for a group of advanced and developing countries in the Maddison dataset, also using bootstrapped critical values. As compared to previous findings in the literature, less evidence is found against the unit root hypothesis. Failures to reject the I(1) null are particularly strong for a set of developing countries considered. Finally, even less rejections are found when relaxing the assumption of Gaussian shocks. 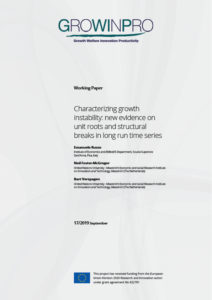 Aggregate Productivity Growth in the Presence of (Persistently) Heterogeneous Firms
Skill Gap, Mismatch, and the Dynamics of Italian Companies’ Productivity