In this article we propose a new methodology for computing the aggregate productivity of an industry, its variations and decompositions of the latter into changes of individual productivities (within effect) and changes in industry composition (between effect). Current aggregate measures rely on some weighted average of individual productivities, and decompositions distinguish between the effect of productivities and weights on variations of the average. However such aggregate measure is incoherent with the disaggregate one (the two are computed with different methodologies), is subject to aggregation biases, arbitrariness in the choice of weights, and information loss. Such problems are particularly serious when het- erogeneity among firms is high. We propose instead a geometric approach where aggregate productivity can be measured directly on industry data, but nevertheless its variations can be decomposed into between and within effects plus an heterogeneity effect. We show that our measure does not incur in many of the problems of the weighted average and we also present an empirical application to European data. 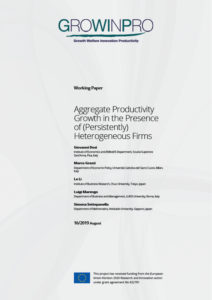 Aggregate Productivity Growth in the Presence of (Persistently) Heterogeneous Firms