Contrarilytothenotionofanaturaltendencyofdeindustrialization,thispaper,documentingtheex- istence of a variety of patterns of deindustrialization, performs a cross-country, long-term analysis. Looking at industrial sectors and their technological characteristics, categorised on the ground of the Pavitt (1984) taxonomy, we do find a markedly uneven process of deindustrialization with Science Based and Specialised Suppliers not presenting any inverted U-shaped pattern, neither in employment nor in value added. The heterogeneity holds both for the four Pavitt aggregates and under further disaggregation at industry level. We then study whether the uneven sectoral composition might have exerted an impact on the timing of deindustrialization. Overall, our analysis brings support to the notion that “microchips” are not “potato chips” in their influence on the patterns of long-term economic development of different countries. Moreover, during the phase of globalisation the probability for low-income countries to be stuck to produce “potato chips” has increased and that of transition toward the production of “microchips” has been reducing. 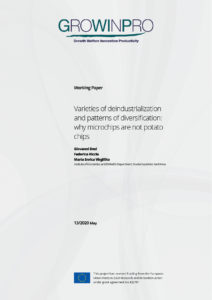 Varieties of deindustrialization and patterns of diversification: why microchips are not potato chips

Do firms really learn from failure? The dynamics of abandoned innovation
The Green New Deal