This paper investigates the productivity effects for domestic suppliers from joining and exiting the value chains of multinational enterprises (MNEs). The vast majority of prior literature has relied on sector-level input-output tables in estimating the effects of vertical linkages of FDI. Instead, our econometric analysis of the creation and destruction of backward linkages of MNEs is based on information on firm-to-firm transactions recorded in the valued added tax declarations data. Treatment analysis based on propensity score matching and panel data from Estonia suggests that starting to supply multinationals initially boosts the value added per employee of domestic firms, including effects on the scale of production and the capital-labour ratio. These first linkages to MNEs do not affect the total factor productivity (TFP) of domestic firms, suggesting that TFP effects take time to materialise. We further find that there are limits to the wider diffusion of the effects of linkages to MNEs. We find no significant positive effects on the second-tier suppliers: the positive effects are limited to the first-tier suppliers with direct links to MNEs. One novel result is the evidence that the productivity of suppliers does not fall, on average, after decreasing or ending supplier relationships with MNE customers. 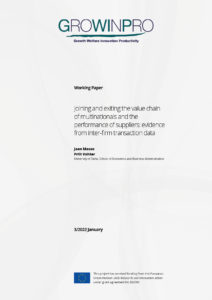 Joining and exiting the value chain of multinationals and the performance of suppliers: evidence from inter-firm transaction data

Green missions to tackle the climate emergency
Envisioning post-pandemic times. Economy and society after the COVID-19