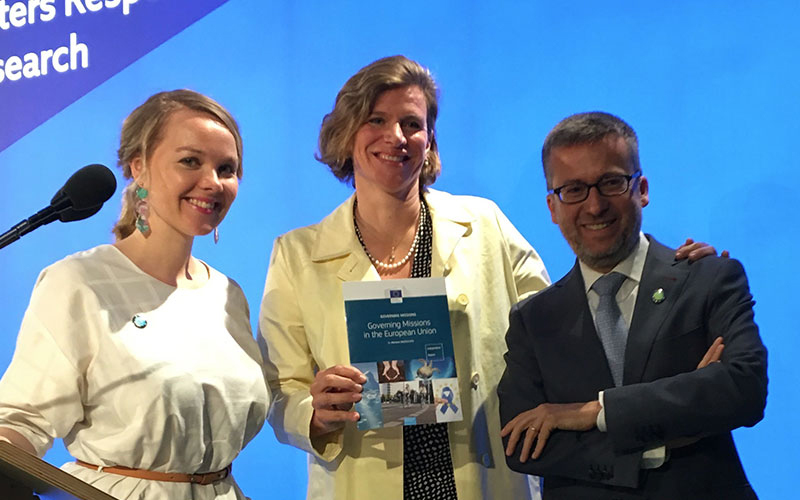 Governing Missions in the European Union is the new report written by GROWINPRO researcher and UCL Institute of Innovation and Public Purpose’s director Mariana Mazzucato at the request of European Commissioner for Research, Science and Innovation, Carlos Moedas.

The report, launched in Helsinki at a European Union Competitiveness Council on 4th July, sets out the approach needed to implement mission-led thinking, focusing on EU research and development funding to tackle global issues.

In her first report for the European Commission, titled Mission-Oriented Research & Innovation in the European Union, released in March 2018, Mazzucato outlined ‘missions’ as bold and ambitious commitments from governments that can stimulate cross-sectoral, bottom-up innovation to meet global challenges such as climate change.

The latest report, Governing Missions in the European Union, looks at how to implement and govern a mission-oriented process in order to unleash the potential of R&I policymaking.

In particular the report focuses on three key-issues/questions: engaging citizens in co-designing and co-implementing missions; tools that the public sector needs in order to foster a dynamic innovation eco-system; the use of mission-oriented finance to leverage other forms of finance.

The report launch comes as the European Commissioner Carlos Moedas officially launched five major European research and innovation missions to deliver solutions to challenges such as cancer, climate change, polluted oceans and soil as well as developing carbon-neutral cities. These missions form a part of the upcoming Horizon Europe funding program which will run from 2021-2027 with a proposed increased budget close to €100bn.

‘Mission-led thinking is a bold strategic approach, and it is encouraging that the European Commission has adopted this strategy in its five major research missions’, said Mazzucato: ‘But we should beware that without new capabilities and financing structures, missions will not reach their full potential. We need to reimagine government in the 21st century for missions to be successful’.