This paper represents the first attempt to bridge the evolutionary theory in economics and the theory of active particles in mathematics. It seeks to present a kinetic model for an evolutionary formalization of socio-economic systems. The derived new mathematical formulation intends to formalize the processes of learning and selection as the two fundamental drivers of evolutionary systems. To coherently represent the aforementioned properties, the kinetic theory of active particles is here further developed, including the complex interaction of two hierarchical functional subsystems. Modeling and simulations enlighten the predictive ability of the approach. Finally, we outline the potential avenues for future research. 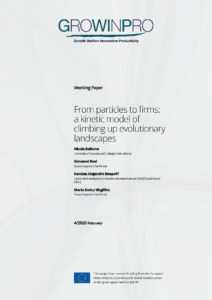 From particles to firms: a kinetic model of climbing up evolutionary landscapes