The explosion of the pandemic has been optimistically considered as the “last straw that breaks the camel’s back”. At the time of writing, after three months since its outburst, we can hardly find any sign of a “broken camel”: indeed, it could have been the opportunity to collectively question the current regime of production and appropriation, exclusion and marketization characterizing this phase of unjust “rentified capitalism”, but the route taken has largely seen a frightening combination of “business as usual” on the production side and pervasive forms of social control, limitations of individual and collective rights and the perpetuation of a false dichotomy between economic and health security. This pandemic, which under decent public health provisions might have been a controlled disease, is producing the most severe crisis after the Great Depression and has been used to implement forms of massive social control hardly conceivable in “advanced democracies”. Butterfly effects are well-known in complexity sciences. However, social scientists have still difficulties in understanding how a grain can make the sandcastle fall down. On the contrary, we are now under the actual risk of starting a “new normal” without dealing with the deep routes and origins of this crisis, with the dominant intellectual discourse pushing for maintaining and indeed reinforcing the status quo, established power and social blocks. This myopic strategy might end up in collectively disruptive socio-political transformations. 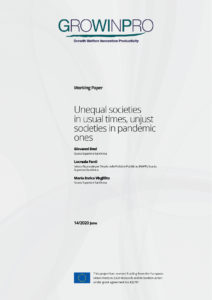