Making use of domestic and international input-output tables and network analysis indicators, we analyze international and domestic trade relationships of Italian industries looking at their ability of transmission of shocks. To do this, we also propose a new taxonomy being able to distinguish sectors in terms of the extent to, and the speed at, which they spread domestic and foreign economic shocks into the Italian production system. Our results show a mismatch between sectors having a central position in terms of trade relationships with foreign countries and those having a central role for the propagation of shocks within the Italian economic system. Only a small group of sectors has both a high openness to international markets and a central position within the network of Italian production system. It follows that the domestic transmission capacity of stimuli from abroad is limited: this aspect strongly compromises the possibility of benefiting from positive shocks deriving from increases in foreign demand, even if it could represent, at least in part, a safeguard element in the event of negative impulses deriving from the trend of the international economic cycle. 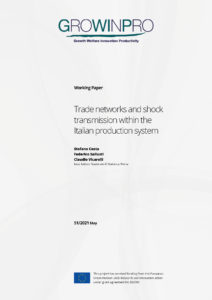 Trade networks and shock transmission within the Italian production system