This deliverable is part of the Task 2.5 with an aim to provide an industry study of the impact of globalization and innovation on employment dynamics in the EU member states. It builds on the discussion which factors to led to the decline of manufacturing employment in advanced countries. The discussion was focused on two key variables: impact of globalisation (mainly negative impact of Chinese imports) and impact of technological change (automation and robotisation of production).
This paper contributes to this research by studying the impact of both globalisation and technological change on manufacturing employment in the period between 2008 and 2018 using an extensive industry-level dataset for the EU 28 countries. Our findings robustly suggest that the increasing share of Chinese imports in total extra-EU28 imports has contributed significantly to the declining trend in EU sectors’ employment. This could imply either that direct competition of Chinese products has caused a decline in demand for locally manufactured products or that local firms have increasingly shifted production of components or final products abroad, resulting in less demand for local labor. The fact that imports from China were slightly negatively correlated with changes in the share of unskilled labour seems to point to the role of outsourcing. On the other hand, we find little evidence of the impact of technology upgrading on employment growth. While the correlation between business expenditure on research and development per employee and employment growth was significantly negative in some specifications, this result was not robust to changes in specification. 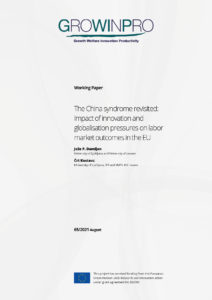 The China syndrome revisited: Impact of innovation and globalisation pressures on labor market outcomes in the EU

Mission-Oriented Policies and the “Entrepreneurial State” at Work: An Agent-Based Exploration
Big pharma and monopoly capitalism: A long-term view