This paper reviews the literature on the socioeconomic effects of tax on robots in order to find an answer to the question whether and how robots that replace routine jobs should be taxed. Although the rapid pace of automation may destroy many jobs, lead to a dramatic increase in income inequality, and result in revenue losses for the government, there is no consensus among economists on whether government intervention is necessary. One strand of economists argues that taxing robots would be a self-defeating act that would spur innovation and slow technological progress, while job losses from the use of robots by foreign competitors could occur anyway. However, another strand of economists that seems to be gaining ground argues for public intervention and the imposition of some kind of tax on robots or the work performed by robots. The first reason is that by taxing robots, governments will be able to generate tax revenue to offset the declining revenue from taxing labor as human labor is displaced by machines. The second reason for taxing robots is to prevent or limit income and wealth inequality that arises from potentially increasing inequality among the types of workers affected by automation and from the transfer of income from workers to owners of capital. Despite the consensus on the need for some kind of tax on robots, however, there is not yet agreement on the precise framework of tax policy. In general, policy proposals fall into two categories. The first advocates direct taxation of firms that benefit from automation, while the second proposes indirect taxation that does not tax firms directly to avoid potential stagnation of innovation. In the second proposal, the tax would be levied on the use of robots rather than robots, so that firms would pay for the negative externalities of using robots instead of humans. An optimal robot tax in our view would be levied similarly to a VAT tax on robot activities, with a tax rate that decreases with the age of the robots. In any case, the introduction of a robot tax requires a coordinated approach between countries, otherwise there is a risk that countries will lose tax revenues due to tax competition. 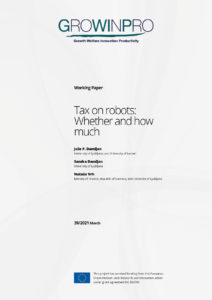 Tax on robots: Whether and how much