In this paper we study the effect of different types of technological regime changes on the evolution of industry concentration and wage inequality. Using a calibrated agent-based macroeconomic framework, the Eurace@Unibi model, we consider scenarios where the new regime is characterized by more frequent respectively more substantial changes in the frontier technology compared to the old regime. We show that under both scenarios the regime change leads to an increase in the heterogeneity of productivity in the firm population and to increased market concentration, where effects are much less pronounced if the new regime differs from the old one with respect to the frequency of innovations. If the new regime is characterized by an increase of the size of the frontier jumps along the technological trajectory, the evolution of the wage inequality has an inverted U-shape with a large fraction of workers profiting in the very long run from high wages offered by dominant high-tech firms. Finally, it is shown that (oberservable) heterogeneity of worker skills plays an important role in generating these dynamic effects of technological regime changes. 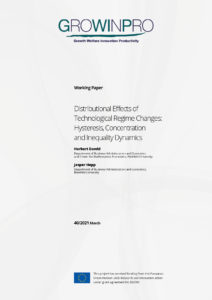 Tax on robots: Whether and how much
Productivity Implications of R&D, Innovation, and Capital Accumulation for Incumbents and Entrants: the Case of Estonia