This paper investigates the impact of investment in automation- and AI- related goods on within-firm wage inequality in the French economy during the period 2002-2017. We document that most of wage inequality in France is accounted for by differences among workers belonging to the same firm, rather than by differences between sectors, firms, and occupations. Using an event-study approach on a sample of firms importing automation and AI-related goods, we find that spike events related to the adoption of automation- or AI-related capital goods are not followed by an increase in within-firm wage nor in gender inequality. Instead, wages increase by 1% three years after the events at different percentiles of the distribution. Our findings are not linked to a rent-sharing behavior of firms obtaining productivity gains from automation or AI adoption. Instead, if the wage gains do not differ across workers along the wage distribution, worker heterogeneity is still present. Indeed, aligned with the framework in Abowd et al. (1999b), most of the overall wage increase is due to the hiring of new employees. This adds to previous findings showing picture of a ‘labor friendly’ effect of the latest wave of new technologies within adopting firms. 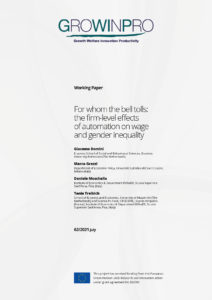 For whom the bell tolls: the firm-level effects of automation on wage and gender inequality