This paper employs a dynamic multi-sectoral growth model with changing technology to study the technical substitution of carbon sectors by green sectors, that is, the Green Transition. The framing of this transition is based on the Flaschel-Semmler dynamic cross-dual adjustment between prices and quantities in the form of a law of excess demand and a law of excess profitability, which produces a complex pattern of oscillations around their equilibrium values. The adjustment coefficients of the model are empirically estimated for six countries using a mixed-effects varying-slopes model on EU KLEMS and WIOD data. The speed of green substitution that allows decarbonization to meet the targets of the UN Intergovernmental Panel on Climate Change is evaluated analytically and computationally with respect to four varying parameters: relative cost efficiency, carbon tax and green subsidy rates, and initial investment ratio. Carbon taxes have the highest impact on the speed of decarbonization, followed by green subsidies; relative cost efficiency has a negligible impact on speed within realistic time frames. Directed technical change is enforced by a revenue-neutral, pro-active fiscal policy of a tax-subsidy form, which has the effect to greatly accelerate the phase-out of the carbon sector and the phase-in of green energy. Without fiscal policy, this substitution process will be too slow to reach the IPCC targets on time. 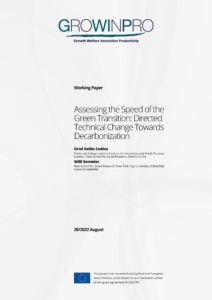 Assessing the Speed of the Green Transition: Directed Technical Change Towards Decarbonization